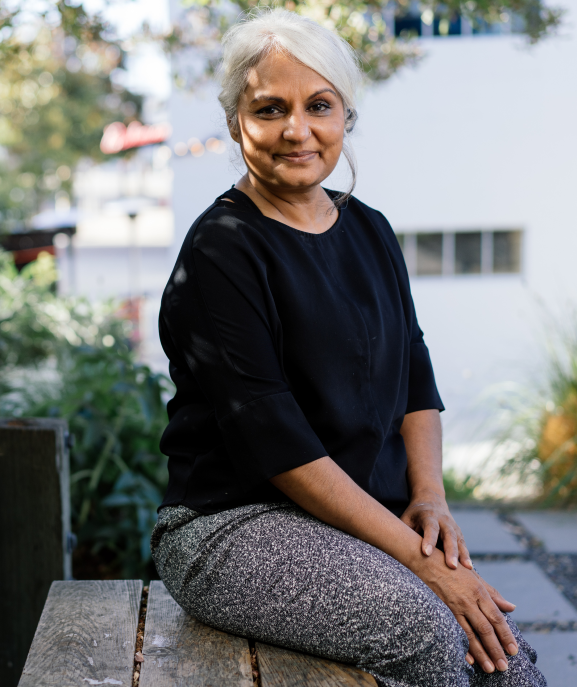 A regional Gujarati restaurant in San Francisco’s Dogpatch district. Roughly translated to mean “shameless,” Besharam features Heena’s bold interpretation of the flavors and dishes that were prevalent throughout her childhood in India, playfully reimagined within a California context.


Born in Mumbai, India to parents from Gujarat, a lush region with a strong culinary lineage grounded in vegetarian cuisine, the kitchen was Heena’s home. While she absorbed techniques and the rich symphony of spices and flavors in her mother and aunt’s cabinets, her love for food was truly uncovered on the streets of Mumbai, where she devoured everything from pav bhajji to idli sambhar. When Heena relocated to London and, subsequently, California, to begin her married life with her husband (and now Besharam co-owner), Paresh Patel, she carried her passion for cooking with her.

As she and Paresh raised their children in the Bay Area, Heena dreamed of a day when she would open a restaurant. At home, she continued to experiment in the kitchen, reimagining the traditional Gujarati dishes from her childhood with California ingredients, including a family favorite blue cheese naan. In 2014, Heena parlayed her ambitions into a residency with Bay Area culinary incubator La Cocina, initially with plans to start a mobile food business. Following a transformative dinner at State Bird Provisions, Heena honed in on her vision for what would eventually be unearthed at Besharam -- a fine dining experience ungoverned by provenance and reflective of her distinct journey and point of view.

During stints at State Bird Provisions and Jardiniere, Heena continued to push the boundaries of the traditional Indian recipes from her childhood, absorbing new techniques and ingredients to express her cross-cultural identity. She began garnering attention among locals with her mobile business, Rasoi, at San Francisco’s iconic Ferry Building, but still dreamt of the day when she would run her own restaurant. In 2018, an opportunity presented itself to partner with Minnesota Street Project, a contemporary art gallery space with a small restaurant space tucked within. Heena transformed the interior to reflect her vivid vision for Besharam, a shameless leap of self-expression where she could finally bring life to her aspirations.

Since the restaurant’s opening, Heena has received local and national attention for her fearless style including accolades from Eater San Francisco as the Restaurant of the Year in 2019. At Besharam, Heena offers an experience that is unmistakably hers, while paying homage to her heritage and every chapter that has informed the journey to this moment.

With Besharam, Heena’s culinary voice is on display with a plant-based menu that showcases her personal journey as a chef, rooted in the traditional dishes and techniques she absorbed from her mother and aunt during her upbringing and localized through seasonal California ingredients that reflect Heena’s adulthood in the Bay Area. The menu is a marriage of these experiences, continuously evolving with new inspirations while showcasing Heena’s nuanced approach.

Guests are invited to join Heena on a tour through Gujarat, a lush region with a strong culinary lineage grounded in vegetarian cuisine. 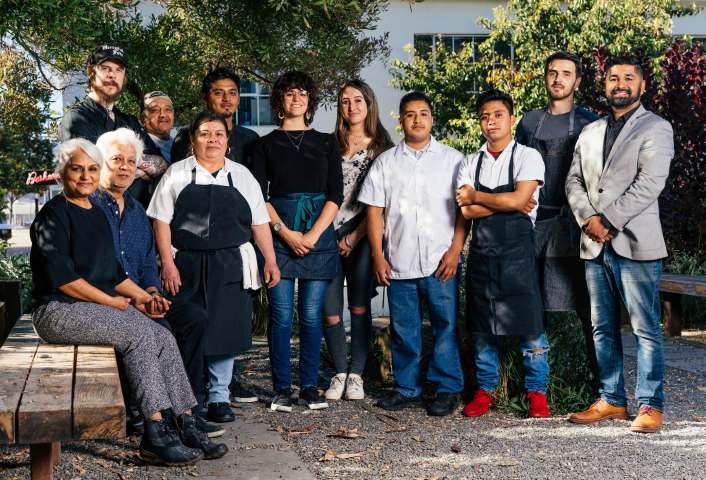 This heritage is showcased at Besharam through menu sections named for the major cities within: Ahmedabad, Vadodara, Surat, and Rajkot. The wine list and beverage program are thoughtfully composed to complement the menu with cocktails drawing inspiration from the kitchen spice cabinet.

Mirroring the creative spirit of the Minnesota Street Project, Besharam features custom artwork from HateCopy pop artist Maria Qamar, who depicts the life and times of first generation Desi diaspora in her pieces.